The weather of Mt. Kilimanjaro

The weather on Kilimanjaro can vary from very hot to very cold in the same day, although it does not experience significant temperature changes according to the seasons. In contrast, the temperature on Kilimanjaro depends more on altitude and time of day. At the base of the mountain, the average temperature is between 21°C to 27°C, and at the top of the mountain, Uhuru, the night temperature can range from -7°C to -29°C. Like all great mountains, Kilimanjaro creates its own climate, which can be highly variable and unpredictable. Hikers should prepare for hot and sunny conditions, as well as rain, wind, cold and even snow. Although the best time to climb Mount Kilimanjaro coincides with the "dry season", it can rain and snow at any time of the year. As you climb, the temperature can vary greatly. One day you might be hiking in the blazing sun and the next day you'll be buffeted by icy winds. At 5895m above sea level, Mount Kilimanjaro is large enough to create its own weather system. Being on the equator means the trade winds (sometimes called ‘monsoons’) that move across the ocean, drawing moisture upwards are interrupted by the mountain. This causes the wind to rise and cooling the mountain; as it moves higher it causes rain and snow.
MOSHI WEATHER 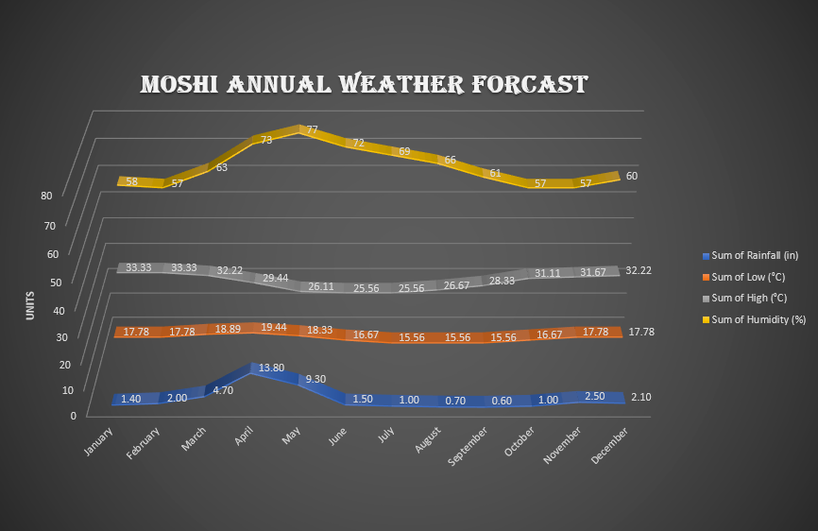 1. Cultivated/ Bushland Zone
Altitude: 800 – 1800m
Precipitation: 500 – 1800mm
The lowest elevation climate zone is the bushland, resting a half mile or more above sea level. Cultivated land, grasslands and populated human settlements characterize this zone. Natural bush, plains, and lowland forests once covered the region. However, because this area is rich with fertile volcanic soil, it makes an ideal land for agriculture. The Chagga people settled on these lower slopes to farm a variety of crops, such as highly prized coffee and tropical fruits. The grounds are irrigated by underground channels tunneling through the earth from the lush rainforest nestled above. Many of the local mountain guides hail from the nearby villages. Large wild animals are rarely seen here, having been eliminated by farmers generations ago. However, small nocturnal mammals such as galagoes and tree hyrax still thrive. Birds, such as speckled moosebirds and tropical boubou, are also are plentiful.

2. Rain Forest Zone
Altitude: 1800m – 2800m
Precipitation: 2000 – 10000mm
The rain forest is drenched by six to seven feet of rain per year and bursts with biodiversity. During the day, warm temperatures and high humidity characterize this densely forested climate zone. However, rainy nights can produce surprisingly low temperatures. Climbers definitely want to have their rain gear handy to protect themselves from the constant drizzle. The rain forest presents the most abundant opportunities for viewing unique types of African flora and fauna. Various species of orchids, ferns, sycamore figs, olive trees, and palms dripping with hanging mosses are found here. Camphorwood trees reach as high as 130 feet through the canopy grasping for sunlight. Blue and Colobus monkeys gallivant through the trees, loudly beckoning mates, and a vibrant cacophony of sounds emanate from the diverse population of birdlife. Climbers approaching the summit from the Rongai, Lemosho, Shira or Northern Circuit routes may be lucky enough to spot elephant, buffalo, antelope and an occasional predator drifting through in search of a wayward meal.
Trail Condition:
The journey begins in the beautiful rainforest at the base of Mount Kilimanjaro. This ecological zone gets an enormous amount of rainfall annually. So, the path here is usually wet and muddy. This is why it is important to have proper hiking boots or shoes that have good tread. Shorts and a tee shirt make the ideal outfit as long as it isn’t actively raining. Trekking poles also help to navigate the landscape.

3. Heath/Moorland Zone
Altitude: 2800 – 4000m
Precipitation: 1300 – 530mm
Also known as moorland, this semi-alpine zone is characterized by heath-like vegetation and abundant wild flowers. According to mountain medicine, the heath zone is in the “high altitude” region. The first symptoms of acute mountain sickness may begin to appear in some climbers. Most of our clients wisely choose spend several days at this altitude to gradually acclimatize to the decreasing oxygen and the higher elevations to come. As we move higher, the humidity and dense forest surroundings begin to give way to drier air and cooler temperatures. The flora thins into smaller shrubs like heather, and the presence of fauna becomes increasingly scarce. The most prominent flora are the unique and iconic Senecios (also known as groundsels) and Giant Lobelias. Kilimanjaro’s giant Senecios and Lobelia are endemic to the region. The Senecios, which translates from Latin to “old man,” have thick weathered stems topped with large, succulent rosettes. Lobelias resemble oddly-shaped palm trees with rosettes that close in the evenings to guard against the chilly night temperatures. The most common birds seen in the heath zone are the easily recognizable black and white crows which forage around camp. Sometimes, large birds of prey such as the crowned eagle and lammergeyer soar overhead.
Trail Condition:
Farther up, in the moorland and alpine desert regions, the trail is usually very dry and dusty. However, this makes the path fairly easy to tackle as the ground is firm and stable. Although it is cooler, most of the times hiking with a base layer and pants is sufficient. Don’t forget to wear a cap and sunglasses to shield your face from the deceptively powerful sun, even if you don’t feel its heat. And apply sunscreen to any exposed skin. Have your jacket ready in case the winds and clouds pay you a visit.

4. Alpine Desert Zone
Altitude: 4000 – 5000m
Precipitation: 250mm
The alpine desert receives little water and correspondingly light vegetation exists here. The temperature can reach over 100 degrees Fahrenheit during the day. The thin air and proximity to the equator result in very high levels of solar radiation. Applying liberal amounts of sunscreen an absolute must. During the night, temperatures often plummet to well below freezing, leaving a dusting of morning frost on the tents. This zone is in the “very high altitude” region of mountain medicine. For ideal acclimatization, climbers should spend a few days here. Our preferred routes encourage clients to “climb high, sleep low” which will reduce the ill effects of altitude. This arid zone has thin soil that retains little water, making it inhospitable to most plant and animal species. Everlastings are one of the main plant species that can withstand such harsh conditions, as well as tussock grasses and varieties of moss. A few of the animals that make appearances in the moorland will wander to these elevations, but the occurrences are very rare.

5. Artic Zone
Altitude: +5000m
Precipitation: Less than 100mm
The final region of the climb up Kilimanjaro is the arctic zone. Finding a region like this in Africa’s equatorial belt is like finding a swath of rainforest in the middle of an Arctic glacier. Characterized by ice and rock, there is virtually no plant or animal life at this altitude. Glacial silt covers the slopes that were once concealed by the now receding glaciers visible from Kilimanjaro’s crater rim. Nights are extremely cold and windy, and the day’s unbuffered sun is powerful. Mountain medicine classifies this zone as “extreme altitude.” Oxygen levels are roughly half of what they are at sea level, making breathing slow and labored. It is likely that climbers will experience varying degrees of altitude related symptoms at these elevations. To combat this, we try to avoid spending too much time here. We summit and descend expeditiously before AMS can escalate.
Trail Condition:
Finally, as you approach the summit you enter the artic zone. This is where you will encounter the harshest conditions. The average hiker wears four layers on top and three layers on the bottom during the push to the summit. It is very cold and windy. The path to and from Uhuru Point requires a steep ascent and descent on loose gravel called scree. Trekking on this terrain can be especially tiring. Your feet sink into the substrate and the rock shifts under your bodyweight. Gaiters help keep the rocks from getting into your shoes and trekking poles will help you balance. Depending on the season, it’s possible that there will be snow on the ground. However, most of the time it is hard packed and no cause of concern.

When to climb Mt. Kilimanjaro?

The best time to climb Kilimanjaro are the months of January through early-March and June through October. The clear skies, great views, and the sunshine makes it the best comfortable hiking conditions. However, there is always the possibility of weather changing dramatically, regardless of the season. You can climb Kilimanjaro at any time of the year, but certain months are better than others. We recommend best to climb Mount Kilimanjaro during the driest months We avoid April and November as these are the main rainy seasons, making the trails more dangerous.
Ideal trekking conditions with mostly dry, clear days, and good visibility. Occasional showers and a good chance of snow over 5267m making for some epic photo opportunities. While this is considered “high season”, it’s often quieter on the slopes than the main climbing season of June to September, making it a good balance of not-too-crowded and decent weather.
Best for: Hikers who want to minimize crowds, whilst still having dry conditions. Snow on the summit is a bonus.

Early March can be lovely, but as the month progresses, the rains can start to set in, making for muddy trails, cloudy skies, and poor visibility. In late March and late May, you can get lucky with some dry weather, but it’s a bit hit or miss. April to early May are the long rains, and not suitable for climbing. If your schedule dictates that you need to go during the shoulder seasons – late March and late May – you need to be prepared for wet weather, and not be disappointed by poor visibility. Ideally, you’ll have some trekking experience already and won’t be phased by trickier trail conditions.
Best for: Experienced trekkers who want to avoid crowds, and who don’t mind unpredictable weather. We recommend the routes on the north side of the mountain.

A combination of the best weather and the US and Europe summer vacations means this is the main climbing season and the busiest time on the mountain. July and August are the most popular months, so if you want to try and avoid crowds, opt for June or September, or October if you don’t mind a bit of rain. Occasional showers are always possible, particularly in the forest, but it’s a predominantly dry time of year. Routes tend to be busier during this period, especially over the full moon.
Best for: Climbers wanting the best weather for their trip, who aren’t deterred by crowds, which are mostly on the Marangu and Machame route.

Short rains usually come in November and last for 3-4 weeks. Often the rain is less persistent than in April-May (the “long rains”) and mostly come in the late afternoon. The mountain is very quiet during this time. We would recommend the Rongai route or Northern circuit route as the northern side of the mountain is more sheltered and has less overall rainfall.
Best for: Avoiding crowds, experienced trekkers who aren’t put off by wet weather.